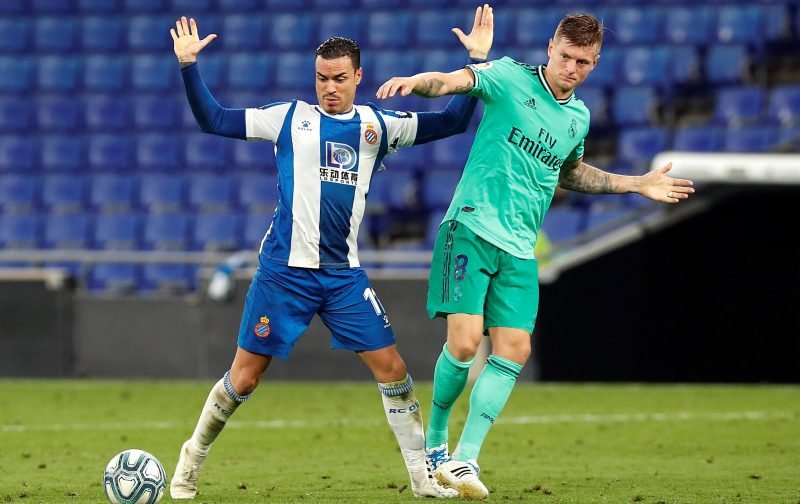 Leeds United are interested in signing Espanyol striker Raul de Tomas, a report from Spanish outlet AS has claimed.

De Tomas only joined Espanyol from Benfica in the most recent January transfer window, and has so far scored five goals in 15 appearances in all competitions for the club, although he was unable to prevent them suffering relegation from La Liga at the end of this season.

As a result, Espanyol may now be forced to sell the striker in order to raise some much-needed funds, something which Leeds could look to take advantage of.

According to the latest reports, Leeds boss Marcelo Bielsa is keen to sign de Tomas in order to add to his attacking options ahead of the club’s return to the Premier League, although it may not be easy for them to do that.

It is thought that Espanyol will demand around £20.7million for the signing of de Tomas, who is also said to be attracting attention from elsewhere England and Italy.

The report also suggests that the fact Leeds will not be able to offer the 25-year-old the chance to play European football next season could work against them in this particular transfer battle.

If Leeds are able to pull this deal off however, it could certainly be a useful signing for Marcelo Bielsa’s side.

It seems pretty clear they cannot rely on Patrick Bamford alone upfront in the top-flight, and de Tomas’ record in a struggling Espanyol side since January suggests he is capable of making an important contribution at top-flight level.

With the price tag that de Tomas is carrying, Leeds will have to be sure he is able to do just that, and that valuation of the 25-year-old, combined with that interest from elsewhere, means this would be some statement of intent from the club if they were to complete this deal.