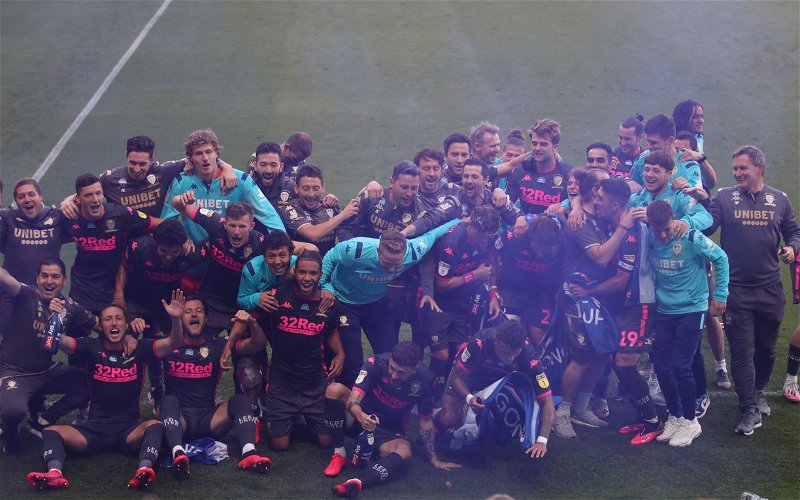 Whatever happens from here on in, there can be no question that the 2019/20 season has been an unforgettable one for Leeds United.

After 16 long years away, and the disappointment of 12 months ago, the Whites secured their return to the Premier League, and did so in emphatic style.

Under the management of the genius that is Marcelo Bielsa, the Whites eventually cantered towards automatic promotion as champions of the Championship, finishing ten points clear of second-placed West Brom, with 28 league wins under their belt, four more than any other side.

Not surprisingly therefore, those of a Leeds persuasion are currently revelling in their hard-earned success, and the club’s social media channels are certainly giving them the opportunity to do so, by picking out the finest moments from the season just gone.

Taking to Twitter, the club have been asking their fans to name their favourite match from the title-winning campaign, with plenty of supporters keen to put forward their nominations for that accolade.

Here, we take a look at what some of them had to say.

Swansea. Undoubtedly. That was the major point where we all felt it really was happening. Players and fans alike. The key win and probably the biggest in 16 years pic.twitter.com/BZiJSvy3cT

I enjoyed the big margined victories. It isn’t very often #lufc win games by comfortable margins but this season saw…

Beating Middlesbrough 1-0 in February, believe it or not. 😳

For pure emotion? Swansea away

Phillips scoring the winner against Brum in our centenary game

Swansea Away and that goal we so needed. Pablo Pablo Pablo……… Hernandez

Birmingham, 5-4. For the absolute mayhem and madness.

Maybe Hull away….we were like a well-oiled machine, got treated to Bill’s ‘solemn chicken’ celebration, four goals, great football, oh – and when they moved Leeds fans in the Hull stands to the Leeds end and half the stadium got up 🤣