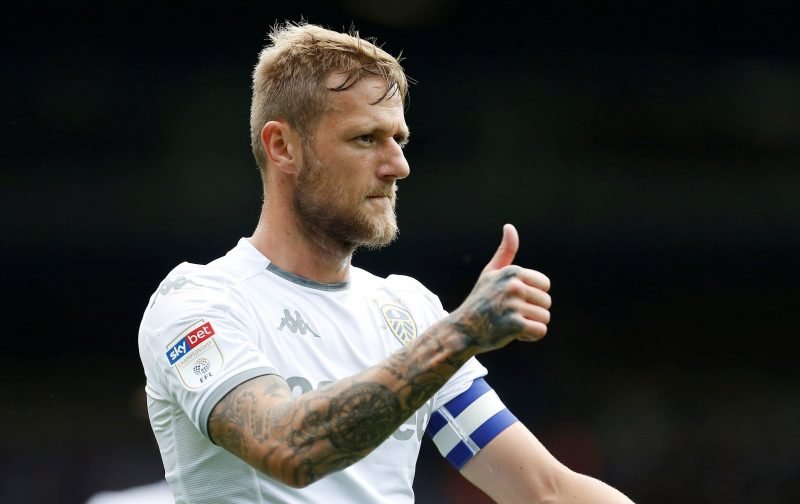 Leeds United manager Marcelo Bielsa has revealed that club captain could return to action when his side host Hull City in the second round of the Carabao Cup on Wednesday night.

Cooper missed Leeds’ opening game of the Premier League season at Liverpool on Saturday with an injury suffered on international duty, with young defender Pascal Struijk instead partnering summer signing Robin Koch at the centre of the Whites’ defence.

However, it now seems as though Cooper is in line for a quick, and welcome, return to Bielsa’s starting lineup.

Speaking to Leeds Live about the centre back’s fitness situation ahead of the game, Bielsa revealed:  “Cooper came back with a slight muscular problem from playing with Scotland. We don’t think this will stop him from playing in the next match.”

Should he play, Wednesday night would bring Cooper up against his first professional club, with the defender having made 16 appearances for Hull between 2008 and 2012, before a move to Chesterfield, where he would stay for two years before making his move to Elland Road in the summer of 2014.

An appearance for Cooper against his old club on Wednesday, would take him to 199 appearances in all competitions for Leeds, and it would certainly be good to see him back out there.

Having missed that trip to Anfield, Leeds are going to want their captain back up to match fitness and sharpness as quickly as possible, and a run out here on Wednesday certainly ought to help him do that.

Indeed, it could be an opportunity for him to develop some sort of link with his new defensive partner in Koch, in a less pressurised environment than a league game.

That being said, Leeds may want to tread carefully here, since they are not going to what to aggravate the injury that kept Cooper out of the Liverpool game, and potentially risk loosing one of their key men on a longer-term basis.