Leeds United End The Season On A High 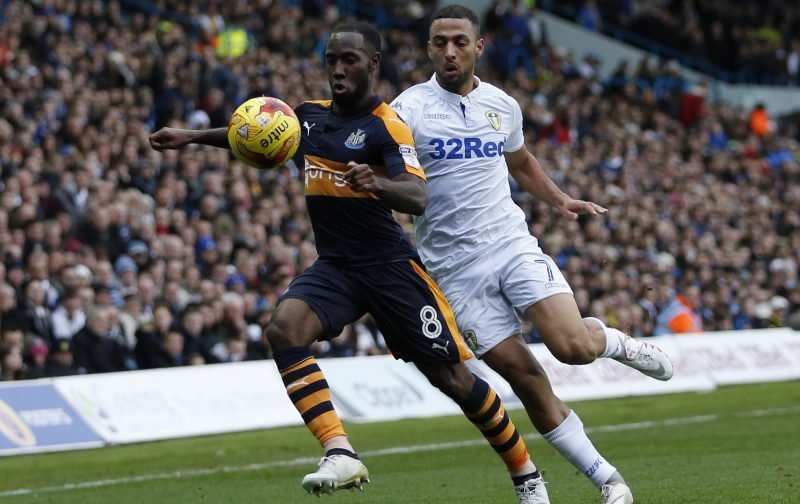 Leeds United brought the curtain down on a disappointing 2017/18 campaign with a 2-0 win against Queens Park Rangers.

Kemar Roofe, who scored a hat-trick when the two sides met at Loftus Road in December, opening the scoring on the half hour with an overhead kick and Kalvin Phillips made it two goals in two games with the second shortly after the restart when he pounced on an error by Rangers keeper Joe Lumley.

Rangers enjoyed the better of the first 25 minutes with former Leeds striker Matt Smith proving a handful for the Leeds defence. Smith saw one header easily saved by Bailey Peacock-Farrell whilst another effort went over the bar.

Josh Scowen also saw a long-range effort end in the Kop as Peacock-Farrell was having his easiest afternoon in the Leeds goal since taking over from Felix Wiedwald in March.

Leeds started to get into the game halfway through the first half. Pontus Jansson and Roofe both saw efforts blocked.

Leeds went ahead on 30 minutes when a corner was swung in and it eventually fell to Roofe who hooked the ball over his own head from close range.

Young defender Tom Pearce, who scored in Leeds last home game, then went close to adding a second but Lumley saved his effort.

Phillips doubled Leeds lead in the opening five minutes of the second half. A poor clearance by Lumley fell to Phillips and he fired the ball home from the edge of the area.

The young midfielder enjoying a good finish to the season with his seventh goal of the campaign.

Both Roofe and Phillips have come in for criticism from fans this season but both have enjoyed a decent campaign.

Kalvin Phillips ends this season on 7 goals, 3 assists in all competitions.

Kemar Roofe ends this season on 14 goals and 5 assists in all competitions.

21 goals and 8 assists between them yet both players have been written off by a majority of Leeds fans. Confusing. #lufc

Kemar Roofe top scorer despite being injured half the season and rarely played in his favoured position. Has his critics but I think he’s a player worth sticking with. I like his attitude too. Also – you just know he’d bag 20 goals with another club if he left! #LUFC @roofe39

Rangers tried to find a way back into the game and Luke Freeman saw his effort go just wide.

Ezgjan Alioski then had a great chance to make it 3-0 but his close-range shot was saved by Lumley.

The highlight of the game was the introduction of 16-year-old academy striker Ryan Edmondson. The young striker has had an incredible season with the under-18s this season and the local lads’ introduction on 73 minutes received a huge ovation.

Buzzing with the win today, even happier to make my debut for Leeds ????⚽️???? pic.twitter.com/VFgeft54K6

Leeds saw out the remainder of the time on a sunny afternoon in LS11. There has been little to cheer about in 2018 for Leeds fans. Leeds turned the year in the play-off places but just four wins in the second half of the season has seen them finish in 13th place and fans are glad it is all over.

Happy to see such a disappointing season end. We should’ve built on a positive 16/17, but this year has been one of my worst supporting Leeds. The club needs to spend serious money if it wants to challenge for promotion. At the moment we’re miles away from been good enough. #LUFC pic.twitter.com/IieF0DldOo

Finally the season ends today it’s been a nightmare season for Leeds and a lot of rebuilding needs to be. Hope a couple of the youngsters get their chance today and show a couple of the first team what it means to play for Leeds #lufc #alaw