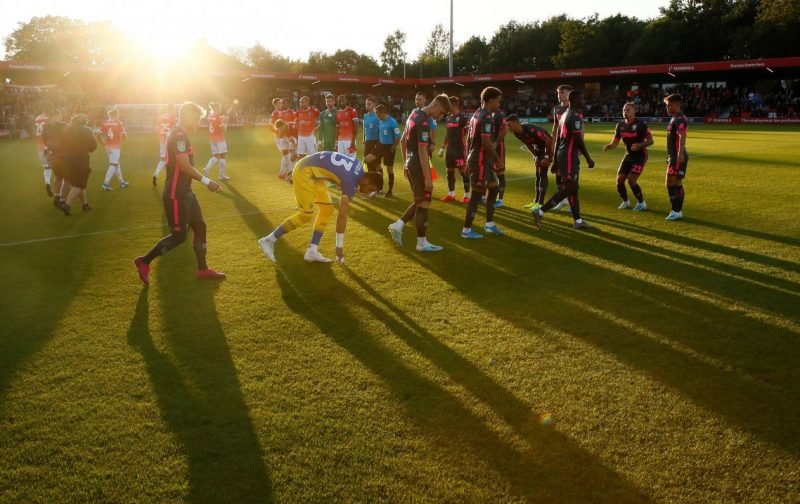 Arsenal loanee Eddie Nketiah made his Leeds United debut in the Carabao Cup on Tuesday night, and did not take long to open his Whites account.

The 5 ft 9 centre-forward put on an energetic display during his first taste of football under Marcelo Bielsa, showing pace to burn that can run Championship defences ragged, and hold-up play that will entice his temporary teammates to join him in attack.

His goal in the 43rd minute was precisely why he was lured to Elland Road at the close of the summer window, too, as he spotted a pocket of space between the Salford City defenders as Helder Costa darted into the box to receive Jamie Shackleton’s pass, before calmly stroking the ball into the back of the net from a couple of yards out.

Patrick Bamford will certainly know he has competition for minutes in the league squad again after Kemar Roofe’s move to RSC Anderlecht, and United supporters were quick to take to social media after the EFL Cup tie to wish Nketiah well with stretching his Whites tally.

The £7.2million-rated forward had shared on Twitter following his debut goal: “Great win for the team and a debut goal. Thanks to all the travelling fans.”

Here’s how these Leeds fans responded…

Congratulations Eddie on scoring your first of many Leeds Utd goals. With you in our team we have a very good chance of reaching the Premier League. Our support is very passionate, and we are all right behind you. Please shoot us to the promised land. Thanks for choosing LUFC.

Decent team around you Eddie, you’ll get the chances, looking forward to seeing you play in the league games too ????

Yes Eddie great work today. Keep that up and you will be worshipped by our fans.

Got the whole of Salford on strings

Just what we need. Cross. Chance. Goal. Simple as.

Good to see you: play, score, look sharp, know where the net is, be quick, appear hungry, not be a snowflake, talk well to camera, be humble, put the team first. I think you’ll do alright here ????

First of many! Well played mate.

You are at a big club and you could be our big player. You will see this season what travelling support is like for our club. We are premier league. You wouldn’t see tourists taking pictures with phones when we score, its limbs limbs limbs. Proper football supporters