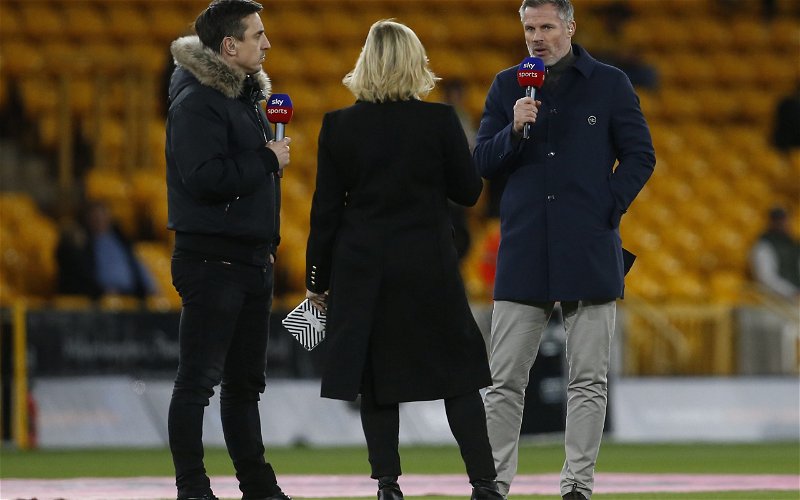 LeedsLive have reported that according to Sky Sports pundit and former Manchester United defender Gary Neville, Leeds could sink into relegation this season.

Talking on The Overlap, Neville made the bold claim when discussing possible relegation candidates, and he said “I would agree with the bottom three you just said there [Forest, Bournemouth and Fulham], But, I do think those two above, Brentford and Leeds are the two that could sink into it.”

Although fellow pundit and Liverpool defender Jamie Carragher had a difference of opinion and didn’t place Leeds in his bottom three, he said “I think Brentford could have a problem. They had a run in the second half of last season where they went 10 or 12 games without winning, and that can happen, but (Christian) Eriksen changed that.”

“Bournemouth, Brentford, and I’ve said I want Forest to stay up, and I think in terms of Fulham, Marco Silva will make it difficult for teams. I think Fulham will stay up, and I’ll go Forest, Bournemouth and Brentford (to go down).”

"Brentford and Leeds are the two that could sink into it.” #LUFC https://t.co/gfcsjo74YX

It is Jesse Marsch’s first full season in charge at Elland Road after guiding the Yorkshire club to safety last campaign, albeit narrowly surviving on the final day of the season. He has had a full pre-season with his players, new and old, to instil his philosophies on the players and get them playing how he would like. Already adding some talented players like Marc Roca, Brendan Aaronson and Luis Sinisterra to name a few. It is understandable to be sceptical of Leeds though, losing Kalvin Phillips and Raphinha was a massive blow to their hopes, and the signings they have made are largely unchallenged in the Premier League.

Interestingly enough, in a poll on the Overlap, nearly a third of all voters ( 31% ) predicted Leeds to get relegated. 52% of voters had Bournemouth in their bottom three, with Fulham getting 46% of the vote and Nottingham Forest 44%. 35% of people had Brentford going down.

What do fans think, are you worried about relegation this season? Will Leeds be safe? Will they finish in the top half? Let us know in the comments.

Are you a Leeds expert? Try our quiz and find out.