Speaking to Football Insider, former Leeds defender Alex Bruce has suggested that the likes of Jean-Kevin Augustin could well have a part to play this season after all, as the striker looks to get himself back match fit.

The Whites have been strong this season but the break in play thanks to the global pandemic has left Whites fans wondering just what is going to happen when the season resumes.

For sure, fitness coaches across the country are going to be tearing their hair out hoping that players are keeping fit, whilst those that have had knocks will need to get back fit.

The break, though, does give players an extra large window in which to get themselves sharp and Bruce reckons that Augustin could take advantage of the current off-season.

When asked about Augustin, he said:

“People who are injured at the minute, when the Coronavirus broke, must be rubbing their hands together.

“It gives them a bit of time to get back fit. If you’ve done hammies or muscle strains or something like that, or you’re recovering from a long-term injury and you’re at the final stages of it, it’ll be them kind of players it’s beneficial for.” 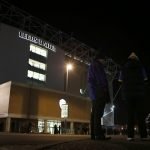 The powerful forward could still play a part this season, then, with this time off providing a boost to his chances of recovery.

Even so, Patrick Bamford has proven the first team striker of choice all season under Marcelo Bielsa, even when there were strong calls for Eddie Nketiah to feature more, and so Augustin, even if back fit, will likely still have his work cut out to try and force his way into the side.