Opinion: Something’s going to have to give if Leeds secure their latest potential signing

So it looks as if there were more than three targets after all.

Noted journalist Phil Hay made the point a few weeks ago that Leeds United were looking at bringing in three people this window. They’ve already secured the signatures of Ian Poveda and Elia Caprile with Jean-Kévin Augustin likely to be announced imminently as well assuming there are no hiccups in the final stages.

According to reports from French outlet L’Equipe, Leeds United are among a number of clubs that are interested in bringing in defender Harold Moukoudi on loan until the end of the season.

And I for one don’t really see a problem with them going down this road on the face of it.

I noted a few days ago that Leeds should only go after a defender when they had solved their problem of scoring goals, and with the signings of Poveda and Augustin (if all goes well), then it looks as if that area of the pitch is hopefully going to be covered.

With Leeds United’s defence not looking quite so solid as it did earlier in the season, and Ben White pointing out that the club needed a lot more clean sheets, perhaps Marcelo Bielsa believes that he needs one more man in the squad that could just push Leeds over the line in the promotion battle.

The question is though, who is going to have to give way for him to make his way into the team?

With Ben White being arguably the best centre-back in the division, with him leading Leeds in a number of defensive categories and being in WhoScored.com’s team of the season up to this point, it’s unlikely going to be him. That leaves the likes of captain Liam Cooper and Gaetano Berardi starring down the barrel of having to be relegated to the bench for the rest of the season, something that both men have had experience of at points this season.

Or are we going to find ourselves with yet another Eddie Nketiah situation where we bring someone in on loan only for him to spend most of his time on the bench in case of ‘emergencies’?

Do Leeds need another central defender? 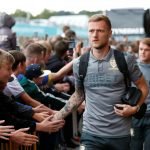 Either way, if this deal goes through, it will be interesting to see how Bielsa handles the situation.