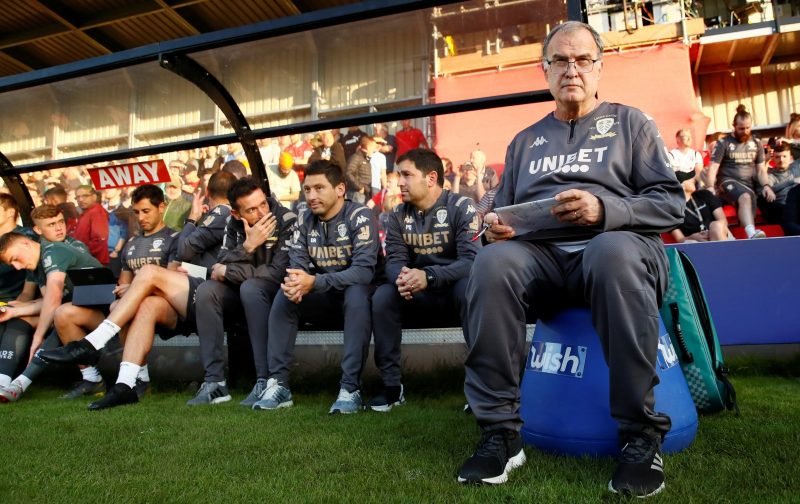 Leeds could be without a further three first-team players for Brentford’s trip to Elland Road on Wednesday night, Marcelo Bielsa has confirmed.

United endured a horrific run of injuries during the boss’ inaugural season in West Yorkshire, but the Argentine has only been without two long-term absentees so far this season in Luke Ayling and Tyler Roberts.

But captain Liam Cooper and fellow defensive options Ezgjan Alioski and Barry Douglas are now doubts for Pontus Jansson’s return to Elland Road, although Bielsa refused to categorically rule the trio out of action during his pre-match press conference on Tuesday.

“We are not sure that Cooper, Alioski and Douglas can play the game, but nor can we say that they cannot,” the boss affirmed, via quotes by Leeds Live.

The Athletic’s Phil Hay added that Bielsa is confident the trio are fit to play against the Bees, but would prefer them to be operating at 100 per cent if they are to taste another slice of Championship action.

Alioski’s absence would have been the least-felt had Douglas not also developed an apparent injury since featuring in our 2-0 win over Wigan Athletic at the weekend, as Douglas is yet to miss a minute of league action this term.

Bielsa seems to be preparing for how he will cope with the trio’s absences, as well, with Whites product Jamie Shackleton understood to be in line for his first start of the campaign at right-back.

An appearance by the 19-year-old would see Stuart Dallas switch sides and line up on the left-hand of our defence, leaving question marks over who is fielded in the centre if Cooper likewise loses his 100 per cent record on Wednesday night.

Gaetano Berardi would be the obvious choice with the 30-year-old boasting a wealth of experience unrivalled by Conor Shaughnessy or Under 23s ace Pascal Struijk. Kalvin Phillips could also slot into the backline, but the Leeds-born anchor’s absence from the midfield would disrupt the entire flow of how we play.

Cooper? Best be a joke Phil

And so it begins

Can we do a Bolton and just postpone to keep our squad fit?

HOW!?!? How do they get injured? Looked like no issues in the actual game!

Good news for the doom and gloom merchants.

So basically the best DM in the League has to move to CB which then changes the dynamics of our team…..to not have got another CB is criminal because of this

1 CB down last year cost us and this year we are 2 down. so whos going to try and fill the gap now ???? as for douglas he must be made out of paper

It’s started already then. Good job we bolstered the squad in the transfer window. Oh, wait… ????

I swear Douglas is always injured after 3 games

can’t play cooper then surely, not worth the risk of long term injury?

Playing Berardi so he can break Jansson in two, smart