Loads of Leeds United fans have been reacting on social media after Chief Executive Angus Kinnear vocalised his desires to see the Championship season recommence when possible.

The EFL announced last week that the remainder of the season would be on hold until such a time that it is safe for fans, players and staff to attend mass gatherings again, with the worsening situation of the coronavirus outbreak pushing the government toward issuing a total clampdown in the UK.

The situation has cast major doubt over how the 2019/20 football season will finish in each division of English football, with the potential for the entire campaign to be declared null and void, continued at a later stage or declared final based on the current standings.

If the season were declared now, we would be due to earn promotion into the Premier League with Marcelo Bielsa’s Whites currently one-point clear of West Bromwich Albion, who hold a six-point advantage over the Play-Off places.

Kinnear is not keen to see the season called now, even if it would mean that we secure promotion, and has called for the EFL and FA to allow the campaign to be played out to its fullest once it is safe to do so.

“Our first priority, like most businesses, is the health and well-being of our staff,” Kinnear told LUTV. “We met again this morning [Monday] to look at what we need to do to keep our players, staff and the broader Leeds United family safe. 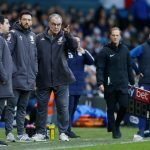 “From what we’ve heard over the past few days, there is a groundswell of opinion that the right thing to do is complete the leagues. At the moment, it is a time for cool heads and patience and I don’t think we need to jump to any immediate solutions.

Are #LUFC paying the staff laid off would be a great question to be answered? https://t.co/2sZcm5jhKZ

What ever he says I distrust

It’s a farce if the league isn’t completed . As a Leeds fan I don’t want to go up by default and every other team needs a chance to get promoted or stave off relegation. We need to finish the season whenever and worry about next season later

Obviously deal with the health issues now but when we return to football we have to finish the season off. Anything else destroys the integrity of the competition.

He’s right though! There’s no way the EFL, FA or any other party are gunna win again at the fans by voiding a full season. Would be detrimental to everyone

Very refreshing to hear that, he’s bang on with everything he said.