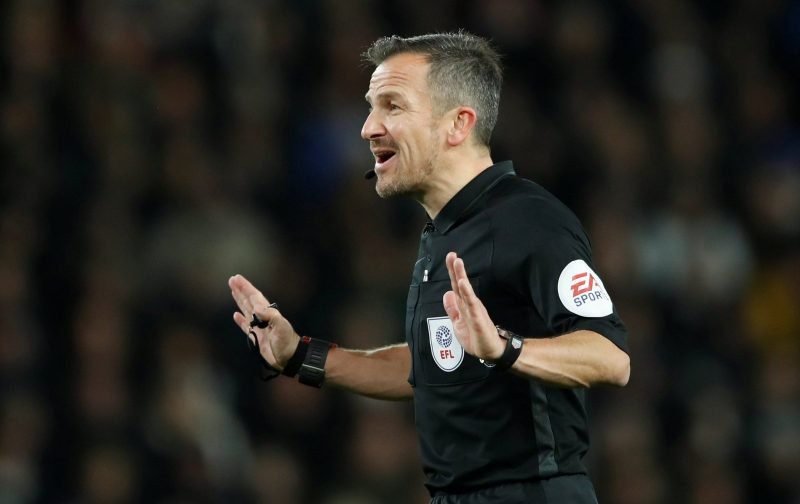 Leeds United are set to face League Two side Salford City in the EFL Cup on Tuesday night, but some Whites supporters are concerned over who the man in the middle will be.

As pointed out to the Elland Road faithful by prominent Leeds author David Watkins, Keith Stroud will referee our Carabao Cup First Round tie at Moor Lane in Greater Manchester, in what will be the second game of the season he has been in charge of.

Stroud held the whistle in Blackburn Rovers 2-0 defeat to Fulham on Saturday, in a game where the 50-year-old issued yellow cards to visiting players Bradley Johnson and Elliott Bennett.

The Hampshire-born referee, who made his league debut as an official in 2006, also deemed Tony Mowbray’s Rovers to have committed 15 fouls, compared to the Cottagers’ nine.

One of Stroud’s final games of last season was also to oversee our defeat on the road to Brentford in April, when he waved away a strong penalty shout after Guinea centre-back Julian Jeanvier appeared to foul Patrick Bamford inside the Bees’ box.

The defeat at Griffin Park was his only Leeds fixture of the season amid a 29 game campaign across all competitions, but he has only overseen more Ipswich Town ties (34) than United fixtures (25) throughout his 13-year career.

Of the 25 Whites games he has held the whistle over, we have won ten, drawn six and lost nine, while being shown 52 yellow cards, two double yellows, two straight red cards, and been awarded two spot-kicks.

Tuesday night’s cup tie with Salford City will be the first Ammies game Stroud has officiated.

I hate complaining about refs but it can’t be coincidence the amount of decisions that go against us.

Lump on Salford then

Stroud is anti Leeds as proved in the past

Stroud is by far THE worst ref available and just due to his appointment expect us to lose, probably to an early penalty and a disputed goal for something he should have done but didn’t.
Have zero trust in his capabilities, all from see our previous games with him not just b’ford

Hard to find a referee nowadays who hasn’t waved away stone wall penalties to be fair. That seems to be part of the selection criteria.

Oh no, him reffing the Salford game doesn’t fill me with confidence. Absolutely terrible referee