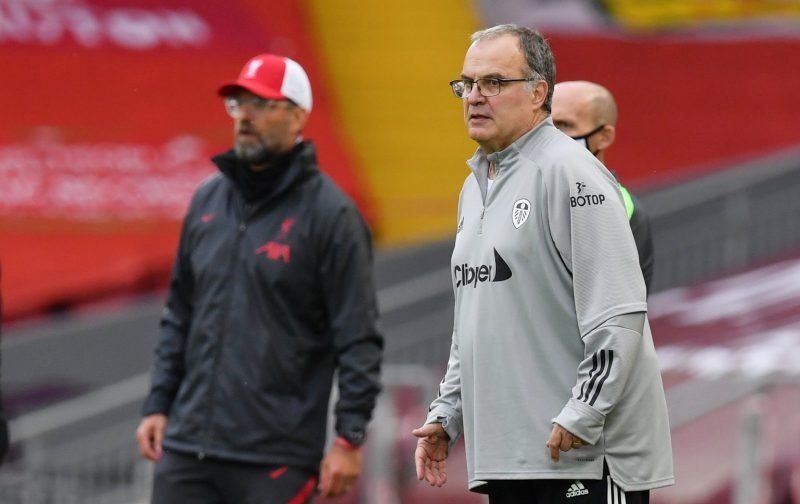 Leeds manager Marcelo Bielsa has admitted that his side deserved to lose in their thrilling 4-3 defeat to Liverpool a Anfield on Saturday evening.

The reigning Premier League and Championship champions served up a thrilling opening day encounter on Merseyside, with Leeds coming from behind to equalise three times, only for Mo Salah to complete a hat-trick with an 88th minute penalty that sealed all three points for the hosts.

But while many were left paying tribute to the outstanding performance produced by Leeds against English football’s top-flight champions, it seems Bielsa was left wanting more from his side.

Reflecting on his side’s performance after the game, Bielsa told Leeds’ official website: “It was a just defeat. It was a rival who made it hard to neutralise them.

“In the second half especially, we struggled to get the ball from defence to attack, we didn’t create danger and although the effort was very good, it wasn’t enough to play the game on even terms.”

Indeed, while Bielsa was pleased with his side’s response to going behind on those three occasions, it seems the Argentine believes his side were second best, as he continued: “Of course I value the rebellion of the team, we also stopped Liverpool from playing as well as they usually do.

“We made a lot of effort to stop them from showing their individual brilliance, but the final analysis shows Liverpool were superior.

“During large parts of the game we were able to match them and we had good efficiency, but lacked in construction of the game.”

This just feels like a typical Bielsa response to a game such as this.

While many are rightly praising his side for the big challenge they gave the side who were comfortably best in the country last season, showing in the process that they are more than capable of competing at this level in the coming campaign, the Whites boss himself is still seeing room for improvement.

That however, is by no means a bad thing, as you would expect it to mean that not only will Leeds continue to maintain the standards they showed at Anfield, but also that they could improve on them.

As a result, after what was already a hugely encouraging start to the 2020/21 season, you feel that Leeds ought to moving on to the rest of the campaign brimming with confidence about what they can achieve.