Loads of Leeds United fans have been reacting on social media after Marcelo Bielsa lauded the fighting spirit of the first-team in Sunday’s 5-4 win at Birmingham City.

Bielsa had seen the squad storm into a two-goal lead inside the opening 21 minutes, but were pegged back by strikes either side of the break. Luke Ayling was able to restore our advantage in the 69th-minute, before again seeing the Blues pull level.

If two times were not bad enough, Lukas Jutkiewicz struck Birmingham’s third equaliser of the day in the first minute of stoppage-time after Stuart Dallas restored our lead, but, thankfully, a Wes Harding own goal in the 95th-minute ensured we left St. Andrew’s with all three points.

The result moved us above West Bromwich Albion on goal difference to round out the year atop the Championship table, and Bielsa has lauded the fighting spirit he saw from the players to never give in at Birmingham on Sunday.

“From all of the previous analysis about our team, we saw in the opposite sense during the match,” said Bielsa, via quotes by the club’s official website. “We had high efficiency to score and we usually need a lot of chances to score, but we didn’t have the safety in defence.

“We conceded goals, where we think we are usually in good conditions to avoid. We should have controlled more of the match in the first half, it was difficult for us in the first part of the second half, and the match had no definition. After 2-2, the match was very strange, one goal kick by kick.

Are you concerned by how we played at Birmingham? 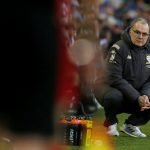 “The spirit of the team, when we were drawing 4-4, Ezgjan Alioski was a left-winger trying to score to make the match 5-4. Every time Birmingham scored, we had the energy to go for one more goal.

You nearly killed me, i’m scarred for life

My blood pressure was very strange…..

We were 2-0 up!!! Second time we have thrown a 2 goal lead away. We need the energy to defend a lead nevermind relying on them to score our winner. Just saying.

Hope we have energy to defend against West brom 😂

We’re going to need this ‘spirit’ against WBA. All the poor defending but scoring more than them worked yesterday, but unlikely to be the same against the Albion.