“Fully deserved”, “Honour to have you” – So many Leeds fans react to £1.8m-rated star’s post 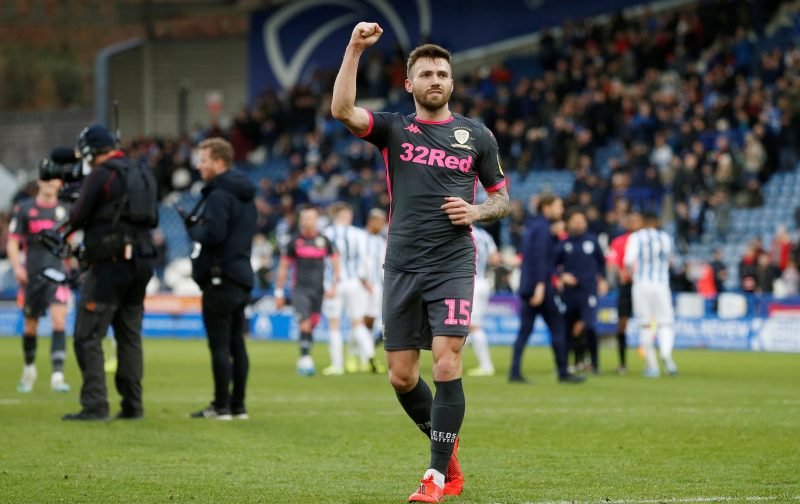 Many Leeds United fans have been reacting on social media after Stuart Dallas shared that the ‘Burley Banksy’ Andy McVeigh had honoured the defender with one of his artworks.

McVeigh has been making Elland Road and the surrounding area a slight bit more colourful for the past year, by painting the nearby electric boxes with United-themed murals portraying some of the highs of the club’s 100-year history, chants sung from the terraces and honouring players past and present.

Some of his pieces were vandalised at the start of the season, and saw the club announce that McVeigh had been commissioned to recreate and restore the damaged artwork.

The ‘Burley Banksy’ has moved on from restoration now, though, and Dallas has become the latest player to be honoured with a piece dedicated to their time in West Yorkshire.

Class work from @pantsdanny – it’s an honour to have my own piece of Leeds United art work. I’ll be down to sign it soon! Thanks #BurleyBanksy #LUFC #MOT pic.twitter.com/FpvckLF29i

Dallas arrived at Elland Road from Brentford in August 2015 for a fee in the region of £1.3million and has been a regular member of the first-team ever since, no matter who has been standing in the dugout.

The 28-year-old has been a particular favourite for Marcelo Bielsa as Dallas offers the Argentine a supremely versatile option, with our £1.8million-rated Northern Ireland international playing 18 games at right-back, 16 in right-midfield, 13 at left-back, three at left-mid and twice in central midfield since the start of the 2018/19 season.

Bielsa has not excluded Dallas from one of his Championship starting line-ups at all this term, either, and the 43-cap star has clearly won the Elland Road fanbase over judging by some of the messages shared as they reacted to the ‘Burley Banksy’s latest artwork.

What will the result be vs Preston on Boxing Day?

Here are some of the reactions offered…

Fully deserved. Have a great Christmas. You both brought a lot of joy to my life this year.

The Cookstown cafu. Everyone loves dallas, it’s hard not to. MOT

Loves the club, is an absolute baller and work rate is phenomenal 👍

All Leeds fans could ever want #mot #lufc

It’s taken some serious hard work and no little determination but you’ve won us all round this season. If you don’t end up Player of Season you ain’t going to be far off! Enjoy your Bansky, you truly deserve it 💛💙👍

You made your mark with us Leeds fans in the PO 2nd leg.. You was the only Leeds player wanting it and that showed with the 2 goals.

Stuart Dallas, proper Leeds; IMO, would have been a regular in Revies squad! And I think the bat of him is yet to come!

Should have one of these in every postcode in Leeds, remind everyone how versatile this guy is.

Keep up what you’re doing this season and you will have a statue at Elland road.
Keep it up pal. Outstanding so far

In other Leeds United news, the club have scouted a £4million striker who’s scored 20 goals in 26 games this season.