‘Brilliant! What a man’ – These Leeds fans love what former Whites star has done 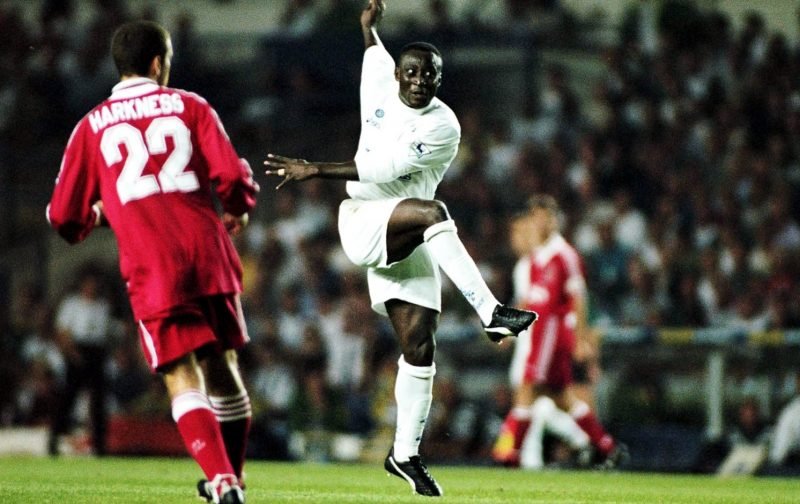 Tony Yeboah was far from a household name in the UK when he signed with us from Eintracht Frankfurt, but the Ghanaian centre-forward left a lasting impression on Leeds during his two years in West Yorkshire.

That lasting impression has certainly not faded over the years, as some Whites supporters have been lauding the Yeboah name once again, after United fan Sam Allan shared on Twitter a photo from when he met the 53-year-old at a ‘Night with Tony Yeboah’ event held at Elland Road a few years ago.

The photo showed Yeboah smiling as he stood arm-in-arm with the Leeds fan, who had taken with him a mask of the Kumasi-born ace’s face that he had purchased from the club’s store during the Ghanaian’s playing days, and even got it signed by the 59-cap former international – who requested the supporter wore it for the picture.

I even met the big man himself during a ‘night with Tony Yeboah’ at ER a few years ago and told him about The Tony Yeboah mask I bought from the clubstore as a kid & how I had it with me. He signed it and said I should put it on for the photo! Legend. pic.twitter.com/7Ib6Anc7GA

Before leaving Elland Road for the Volksparkstadion, the home of Hamburger SV, in 1997, Yeboah made 53 appearances for United, in which he scored 27 of his 182 career goals.

Most famously, the £3.4million signing left former Liverpool and England goalkeeper David James clutching thin air in the second week of the 1995/96 season, as he unleashed a monstrous volley from 25 yards out that smashed into the Reds’ net off the crossbar to ensure the points remained in West Yorkshire.

This is absolutely brilliant ????

Brilliant! What a man.

And that’s Tony saying it, so it’s nothing vicious, yeah.

Which one’s the real Yeboah? It’s hard to tell.

‘Things that would absolutely never be approved for sale in 2019’

Arguably one of the best strikers Leeds have ever had! Particularly special goals