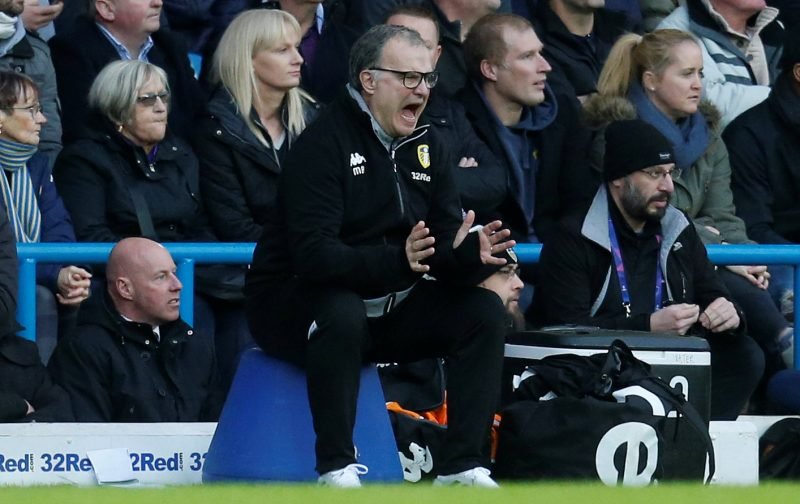 During the pre-game press conference ahead of our Yorkshire Derby clash with Sheffield Wednesday at Hillsborough, Leeds United manager Marcelo Bielsa gave a quite in-depth answer when he was tasked with questions about the ongoing Patrick Bamford vs Eddie Nketiah debate amongst the fans.

Bamford is the regular starter but following Saturday’s clash, he is now nine without a goal and sits on four for the campaign. Nketiah has scored more recently and his effort in our last game against Preston took him to five for the season.

Bielsa’s full explanation can be found by Clicking Here but in essence, it’s obvious that he feels Bamford’s overall game play and team ethic is of more advantage to us than Nketiah’s style, which is more focused on scoring for himself.

Understandable really and Bamford has come in for praise this year for the way he’s better leading the line this time around.

Fans had the typical reaction to his words, especially the one crack where he admitted ‘I am not 100% sure what I’m saying’, as that certainly made me smile, but ultimately you either love Bielsa or you love Bielsa I think.

Fair point but isn't no goal in 8 more than enough to start Eddie?!

When your lone striker doesn't score in 8 games, that's worrying and a change is needed!

That press conference was brilliant – I do find them frustrating at times with the translator. He fully understands the Bamford v Eddie debate. & virtually admitted he wishes he was able to throw him in but his style is based on analysis thats the way he builds his team – ❤ him

Very fair point. Crossing and passing into the box and its accuracy is something that needs a lot of work.

That was brilliant. Absolutely love the bloke. And he started speaking English at one point. ????

It’s a bit mad really. He’s saying then that he wants his no9 the create the chance and score the chance?

Yes but when the chance falls to bamford he is not converting them so what’s the point? Either start Eddie & bring bamford on or play both. Anything to take bamford out of the firing line. Where’s the man management towards bamford?

It's easier to teach Nketiah how to make these contributions than it is to teach Bamford how to score. Nketiah is a natural born finisher, which Bamford will never be

Reluctant to start Nketiah cos Bamford suits the style of play more ( even though he’s not scoring) Begs the question why didn’t we sign a different type of striker in the summer?